>Blog>Would You Drive Less If You Paid for Insurance by the Mile?

If you’re like most drivers, the answer seems to be “yes.”

We analyzed 191,699 trips made by Metromile customers who started out on a free test drive program and later switched to pay-per-mile insurance. (Each switcher had at least 30 days of driving before and after the switch). On average these individuals drove 16.4 miles per day before purchasing per-mile insurance. After switching, they drove on average 15.5 miles per day—a reduction of 6%.[1]

What’s going on here? It turns out that economics predicts exactly this outcome. When you buy traditional car insurance, you pay a fixed premium. That means that when you’re deciding whether or not to make a given trip, insurance cost doesn’t enter the calculation since that cost is invariant to whether or not you make the trip. You might consider the cost of gasoline and your time, because those costs increase if you make an extra trip, but not insurance costs. One consequence of traditional car insurance is that drivers with below average mileage in effect subsidize the premiums of drivers with higher mileage (an individual’s risk of an accident in a year increases with miles driven).

But when your car insurance is on a per-mile basis, the equation changes. Drivers with below average mileage start to save money, whereas drivers with above average mileage pay more. The less you drive, the lower your premium, so there’s a clear incentive to reduce your miles driven. In order to achieve the same incentive for reducing mileage, the tax on gasoline would need to be on the order of $0.74 per gallon! This is larger than the state gasoline tax in even the highest tax states. Simply changing the way insurance is priced has significant environmental advantages.

The below graph tells the story. 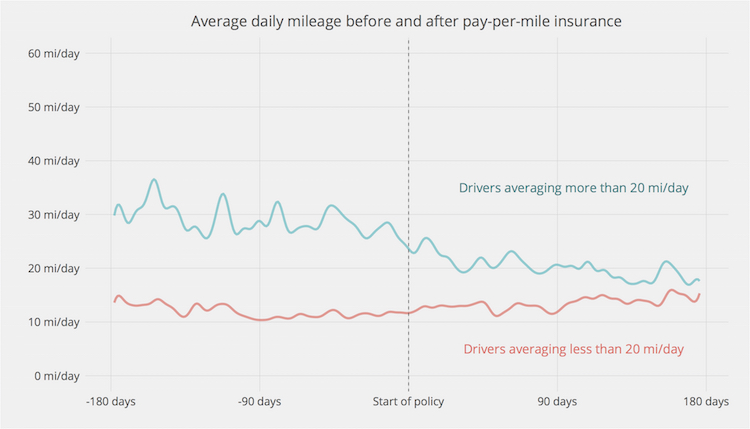 A Brookings Institution analysis in 2008 forecasted this effect, estimating that a nationwide change to pay-per-mile insurance would yield a net mileage reduction of 8%, an estimate that is remarkably close to what we observe in our data.

This reduction in miles driven has some real social benefits. By introducing pay-per-mile insurance and effectively rewarding drivers to cut back their driving, the costs from road congestion, road maintenance, accidents, and tailpipe emissions, all decline. All this from simply giving drivers the ability to save on insurance costs by driving less—something that the traditional fixed premium approach to auto insurance does not do.

[1] The mileage reduction is statistically significant at the 95 percent level using a two-tailed t-test for difference in means.