>Blog>The OBD-II: What’s it Doing for You?

Ever notice your mechanic plugging into that little port under your car’s dashboard? That port is part of the on-board diagnostic (OBD) system, and it is playing a major role in minimizing pollution caused by cars. Devices plugged into the OBD port are also providing important insights and optimizing the driving experience. If you missed our first blog about the history of the OBD port, here’s a quick rundown of why it exists and all of the innovative ways it is being used today.

The OBD system was first introduced in the 60’s as a way to measure a vehicle’s emissions. Decades later, a more robust version known as the OBD-II was introduced, also able to monitor parts of the chassis and body. In 1996, amendments to the Clean Air Act required the OBD-II to be built into all light-duty vehicles (aka all cars available to consumers) as part of the Environmental Protection Agency’s attempts to reduce toxic emissions. If something in your engine malfunctions, your car might run just fine, but you could ultimately face expensive repair costs or unknowingly release toxins into the air like Benzene and Formaldehyde (potential human carcinogens). Because of this regulation, all cars will display a “check engine light” when something is wrong, and mechanics can plug into the OBD-II port to diagnose the problem. So just how bad could things get if we didn’t regulate emissions and monitor engine health? The photo below is not from a horror movie – it’s of LA in the 90’s before OBD ports were standard in all cars and it was hard to detect if an engine was dangerously inefficient. 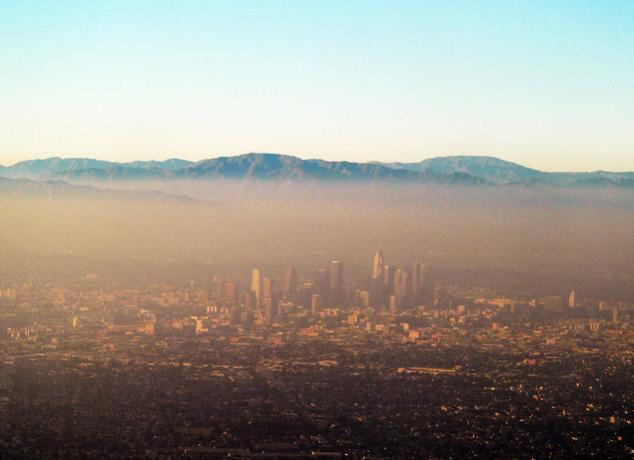 Fast forward 20 years and the OBD system is proving to be an important factor in reducing the damaging effects of car emissions on our environment. Since the introduction of the Clean Air Act and the OBD requirement, toxic emissions have steadily decreased. Companies are also developing devices to use in tandem with the OBD-II port in all sorts of new and inventive ways. For example, our per-mile insurance customers plug the Metromile Pulse device into the OBD-II port to measure exact mileage. This enables us to provide low-mileage drivers with a more fair insurance pricing model, since their monthly bill is based on the miles they drive, not just on a rough estimate (which other insurance companies sometimes offer a small discount for). We also use the Pulse to help drivers decode the mysterious check engine light without visiting the mechanic, see personal driving stats and avoid street sweeping tickets. We’ve even used GPS functionality on the Pulse to help recover stolen cars! Fleet management services are using OBD devices as well, allowing them to communicate with their vehicles in real-time and monitoring things like location, speed and driver behavior. With a recent Deloitte survey finding that 72% of smartphone users see value in connected car technology, we expect to see additional use cases of OBD devices in the near future.

Want to see the power of an OBD device in action? Learn more about Metromile’s per-mile insurance offering and get a free quote now.