The following is a guest post from Neil Richardson, an advisor for The Zebra, the nation’s largest car insurance comparison marketplace.

For the working masses who commute on a daily basis, private cars (75%) or car pools (9%) are most often the transportation of choice. But for those who can’t or don’t want to travel by car every day, there are plenty of other options for getting where you need to go. 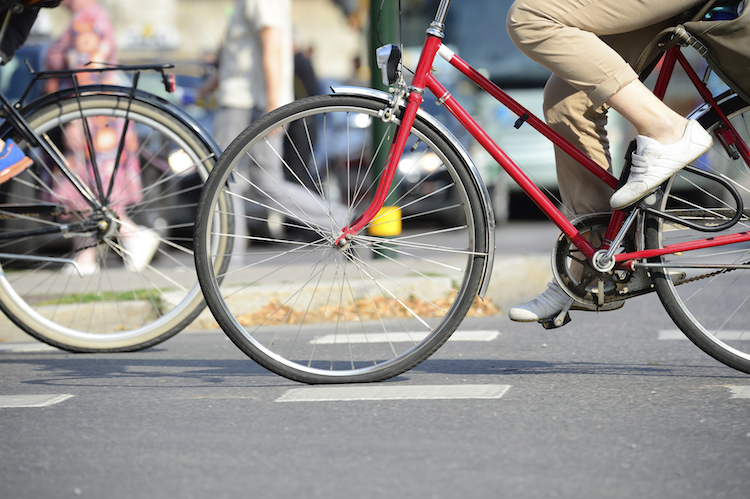 Bicycles are a green, healthy and affordable option, and cities are increasingly becoming more bike-friendly, adding new bike lanes and cracking down on dangerous driver behavior that threatens cyclists. (See the League of American Bicyclists’ state-by-state guide to bicycle laws and ranking of the most bicycle-friendly cities and states.)

2. Gi FlyBike ($2,000): This bike was created for commuters. It folds in half for easy storage in seconds, and it can be ridden as a traditional bike or by activating its electric mode, which can give riders a rest for up to 40 miles. The Gi FlyBike also has smartphone charging and is expected to start shipping in March 2017.

Mopeds
Most states define moped as two-wheel vehicles with engines smaller than 50 ccs which cannot travel faster than 30 mph (think: Vespas). They’re relatively small and cheaper than motorcycles (and cars), but aren’t fast enough for highway or long distance driving. You’ll want to review the rules of the road before driving a moped – for instance, mopeds must be registered with license plates in some states but not others.

Cost? Generally as low as $1,000, but you can find used mopeds for a few hundred bucks or fancy models for several grand. The Zebra likes:

3. FEDDZ ($8,700): The FEDDZ electric bike zips up to 25 mph and has a 37-mile battery range with quick-charging capabilities. It’s got room for storage and plenty of lights for early morning or late-night commutes.

4. iTank ($5,500): This battery-powered electric scooter reportedly goes from 0 to 28 mph in just 4.6 seconds and features three wheels for balance and a smooth ride. It’s not ready for sale yet, but the company promises “soon!”

5. CityBug ($800): This electric scooter is great for short trips (up to 12 miles per charge), folds easily, and has a wheel hub motor for stability.

Motorcycles
Certainly the fastest and most road-ready of the list: motorcycles. By definition, a motorcycle features an engine larger than 150 cubic centimeters and has no more than three wheels. The right gear and sufficient body protection are critical, as motorcycles are more dangerous than cars, and riding, especially in the elements, takes experience and practice. Motorcycles are less expensive than cars (for the most part), use less fuel, and are easier to park, but maintenance tends to be pricy. And note that even if you have a valid U.S. driver’s license, you might need a separate motorcycle license or an additional classification on your license (see state-by-state requirements) and specific motorcycle laws, like whether you’re required to wear a helmet (and what type), if lane splitting is allowed, etc.

6. Gogoro ($4,100): The Verge says Gogoro is “the coolest two-wheel runabout you can buy.” It’s completely electric, features hybrid racing tires, and can reach 31 mph in 4.2 seconds with a top speed of 60 mph.

7. Johammer J1 ($25,500): This electric motorcycle can go up to 125 miles on a single charge, and instead of putting an electric motor into a traditional motorcycle, the Johammer’s electric motor and controller are built into the rear wheel, with no maintenance required.

8. Zero DSR ($15,995): An electric motorcycle meant for traveling off-road as much as it’s meant for on-road, this bike is completely electric. This bike has been commuter-tested and passed. Tax credits, rebates, charging station tax credits might also be available. Another benefit of an all-electric bike like the Zero: much less maintenance.

9. Monoracer ($55,000): The Monoracer is a “cabin motorcycle,” designed for long-distance travel and high speeds. It definitely does not look like a motorcycle, if that’s what you’re going for, but this ride can reach 155 mph, is available in both gas and electric versions, and has high-quality music and advanced safety features.

Editor’s note: If you find yourself driving your car less during the week, Metromile’s pay-per-mile insurance could be a great way to send money because your bill is based on the miles you drive. Get a free quote here!