When potential Metromile hires meet Jenn Hall, they’re likely not surprised to learn the six-foot-two director of talent acquisition used to play basketball. What they may not know is how her 15-year career on the court influenced her professional life today. “Basketball was all I knew — I was recruited into recruiting,” she says. “They told me tech recruiting was the hardest kind, so I said, ‘sign me up!’ I wound up applying the same fundamental methods that I used to become a D-1 basketball player: practice, commitment, and discipline.” 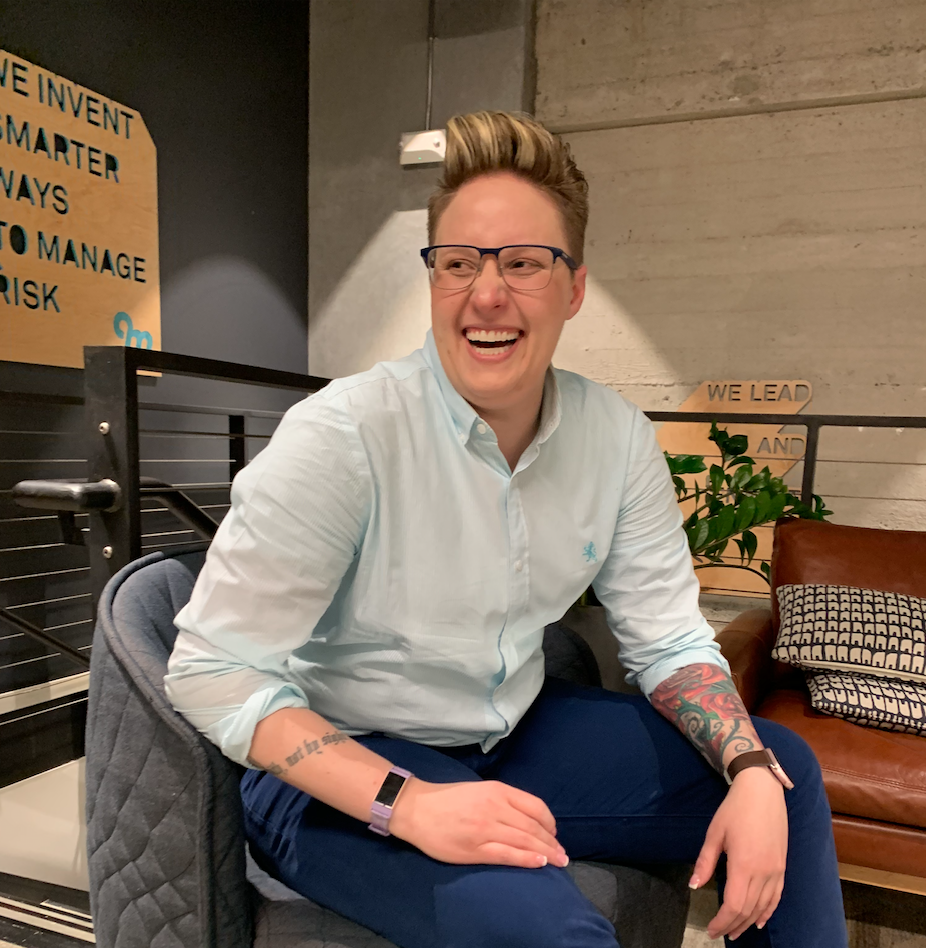 But the grit and determination Jenn developed as an athlete shaped her personal life as well. After graduating from Vanderbilt University, the Orange County native felt liberated to start embracing her authentic style — and her sexual orientation. “I came out at 23 and just wanted to feel comfortable in my own skin,” she says. “I had to figure out a lot, do a lot of self-discovery, and become more self-aware. It was challenging — when I stopped playing sports, I didn’t have distractions to cover up the other things in my life. Sports had always been my number one priority, so I had to figure out what motivates and inspires me — and I had to stop paying attention to what people were saying.”

It turns out that what inspired Jenn and continues to get her fired up to go to work each and every day is the opportunity to help others uncover their own unique strengths. “Staying strong wasn’t always easy, but It’s all about finding your voice.” We talked with Jenn to learn more about the ways discovering her identity helped contribute to her success and happiness.

How did you get your start in basketball?

I found my love for basketball when I was seven years-old, and that was really my first career. I played for 15 years. I started playing travel basketball when I was 12, and played through college — I was Division-1 at Vanderbilt. I could’ve gone to a lot of other schools but wanted to play in the best conference, the Southeastern conference, and get a degree. I chose a degree, known as Human and Organizational Development — this provided me the ability to pick and choose curriculum I was interested in, and could apply in the real world after school (Psychology, Communications, Organizational Structure & Processes).

Why did you pursue tech recruiting rather than a professional basketball career?

I had a lot of injuries — I had a broken bone in my foot, neck and problems, bad knees. I knew my shelf life would be super short. I also had a lot of friends in the WNBA who weren’t making money and were living at home and I didn’t have that option at the time.

You came out during that transition from sports to recruiting, right after college — tell us more about that time in your life.

It was hard. Really hard. I grew up in a conservative Christian household and it was not accepted. I had always been in a really good place with my parents and had talked to my mom like five times a day…and then didn’t talk to them for five years. It took a lot of patience and time. Basketball was my distraction and I was used to having to prove people wrong, so that was the mindset I had. I had supporters around me who made me feel like it was okay for me to be myself, like my best friend since seventh grade, Christina — I ended up recruiting her!

When did your family come around to your decision to embrace your true identity?

It was at my brother’s wedding seven years ago. It wasn’t easy and there were a lot of conversations. I was 23 years-old and couldn’t do it anymore. I very much hate lying and not being honest. But my family and I rebuilt our relationships and now we’re stronger than ever.

After college, you worked at Google, Hulu, Westfield, and OneMarket — how did you eventually find your way to Metromile?

I was laid off at my last job and realized it was really important to me to be surrounded by a team of people who truly cared about me.  People might think it’s super easy to find a job in my industry, but the hard part is that there aren’t a lot of companies I’d be proud to wear a hoodie for. It’s like being a basketball player and wearing a team jersey with a number on it; a lot of opportunities weren’t right for me. So I looked on Glassdoor and that’s when I applied to Metromile. I saw so many positive reviews of the leadership team, and even though I didn’t really know a lot about insurance, I saw that our CEO, Dan, is really into A.I. and data science, and I love tech — I’ve always loved tech. So I thought, ‘I’ll just apply, what’s the worst that could happen, they say no?’

But they didn’t! You got the job last August. Tell us about your role.

Right now I manage six people and I have one open role so I’ll have seven people in the next couple of months. I’m a career coach and manage executive recruiting, and as head of recruiting, my team does everything related to attracting, engaging, and hiring the talent we need to be successful as a company.

How has your personal journey influenced your ability to manage employees and help people find their professional calling?

Being more self-aware has made me more aware of other people, which in turn lets me identify what they’re passionate about and what motivates them. I love being able to sit down and have conversations, sharing what I’ve done, and learning what inspires them. I can see where people can go and I like helping them get there.

You said the Panic! at the Disco song, “High Hopes,” reminds you of how embracing your identity paved the way for your success. Tell us more.

How doesn’t it? It’s like my anthem! The words are very poignant and relate to some situations I had to endure Like, “didn’t have a dime but I always had a vision.” I haven’t had anyone supporting me since I graduated from college and I had to get creative. I was selling my Jordan shoes on eBay to pay rent! It took time to get there. It hasn’t always been rosy and peachy, I’ve worked really hard. And when he sings, “mama said…” that to me is reminiscent of earlier parts of my career that were building blocks, not only to me as a person, but as a leader, and those situations made me even stronger than I ever could have been otherwise. As I went through my journey, I’ve been able to learn how to adapt and I’ve never stopped believing in myself and my abilities. As long as you have that, you can achieve anything.