>Blog>How I Drive: Pay-Per-Mile is for Car Nuts, Too

Meet Ted Howard: a self-proclaimed car nut who, though he owns three cars, drives far fewer miles than most. Ted lives in a beach town, so juggles parking three cars on the street while fixing them up and hunting for his next deal. Paying for insurance by the mile keeps that hobby approachable for him by cutting down on the expense. 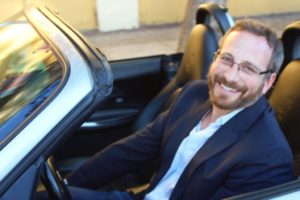 You’re one guy with three cars.
I feel like I should say I currently have three cars. I’m always looking at cars for sale. Right now I have a 2011 Honda Accord V6, a 2002 Porsche Boxster S, and a ‘98 Mustang convertible.
I’m a car nut. It’s really because of Metromile I can deal with having more than two. The Accord is the most reliable and the one I don’t care about. I’ve always loved Boxsters, but it’s never going to be a good only car to have — actually, it costs me less money to have more than one car as opposed to having only the Porsche, since I can avoid the big maintenance bills by not driving it every day.

And you don’t take them to work?
I work from home, teaching clients around the world the science of the mind-body connection to eliminate chronic pain. I do that by video or over the phone, so I do not have a typical commute.
I have these three cars, but I’m only one driver. My mileage is below average compared to people who have only one car. Someone told me about Metromile a few years ago, and it’s a great fit for me.

When and why do you drive?
I do have occasional in-person meetings for work. Or I drive to lunch or to the gym — standard errands. I have intentions to bike more, too, to drive even less. But since I work from home I sometimes feel cooped up in the house, and I’ll take the Porsche out at night and drive 14 miles to get pizza.
My family lives in Las Vegas, so I occasionally take the trip out there which is 600 miles. If I don’t do that trip, I’m probably only driving 600 total miles a month. Cost-wise, the three cars with pay-per-mile insurance cost me about the same, or sometimes less, than two cars with regular insurance.

So you’re saving money with Metromile
Sometimes it’s about the same as when I only had two cars and traditional insurance; the big difference is that pay-per-mile makes it painless to indulge my hobby.
I look at it this way: no matter how many more cars I add I never have to pay more for mileage. I’m always going to drive the same amount of places regardless of how many cars are sitting out on the street.

You park all your cars on the street?
I have one parking spot, but by default park on the street. It’s easier when there’s no weekend beach traffic.

Ever forget where you’re parked and use the Metromile app to locate your car?
You know, I never thought of using the app for that, but I do use it to keep tabs on my mechanics. I can take a look at the app and see if they’ve moved it. When I see they’ve taken it for a multiple test drives I can tell that the work is nearly done.
I did use the location feature when I was living abroad for five months. I had asked a friend to drive my Porsche once a month just to keep it running, and looking at the app I could see my friend was at the comedy club in LA. I got to call him and hear some live comedy at 10am in Thailand, and because of the Metromile alerts I was able to call him at the right time. It was a way to connect with my friends at home for a bit.

How about for maintenance and diagnostics?
I do use the diagnostics tool for any codes that are being thrown on the car. It’s the quickest, easiest way to get the info and also offers me the ability to not go out to the car to get it. You can get a bluetooth device that does the same, but they’re 40 bucks and you need to be near the car. This is free and emails me the info.

Anything else we should know?
The #1 thing for me is I like cars. I’m always looking at cars for sale. This type of insurance allows me to think about owning more projects. It’s just not going to cost as much to add a car as it would otherwise. This removes that one huge expense that gets in the way. Buying and fixing up old cars, that’s my hobby.
In reality, the cost of traditional insurance is more of an inconvenience than parking three cars on the street in a beach town.